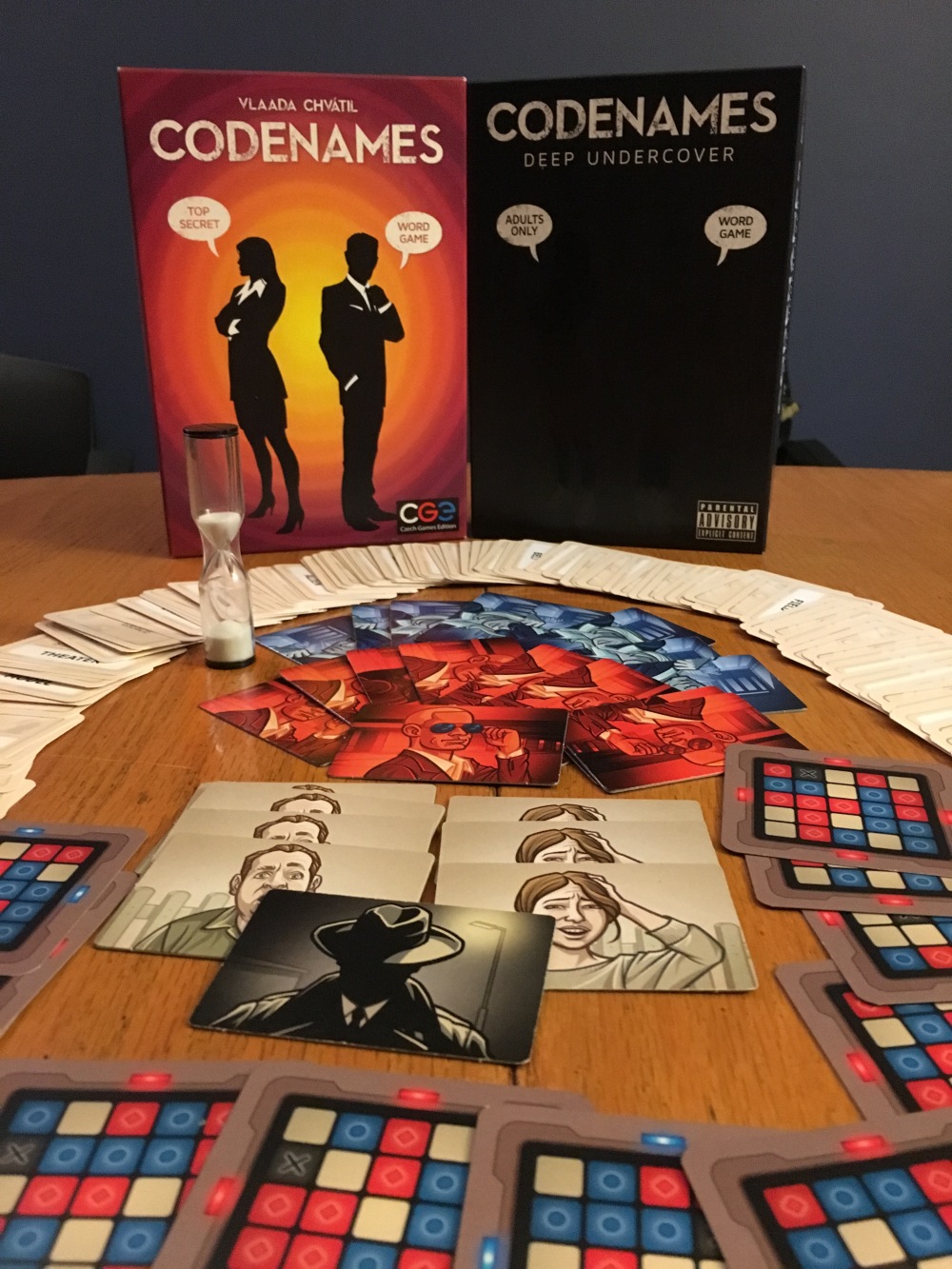 Looking for the next great party game to add to your collection? Well, look no further than the game Codenames.

Buy it on Amazon via He said, She Said Games

Skip ahead to find out:
Game Play
What He Said
What She Said
Our Pros and Cons
The Verdict

In Codenames, two teams, each lead by a Spymaster (aka clue giver), compete to see who can be the first to make contact with all their secret agents. The catch is that the Spymaster’s teammates only know the agents by their codenames.

Players split into two teams – red and blue. One player on each team is selected to be the Spymaster and the rest of the players are field operatives. The “board” in this game is 25 cards, placed out in a 5×5 grid. Each card shows one word that is an agent’s codename. 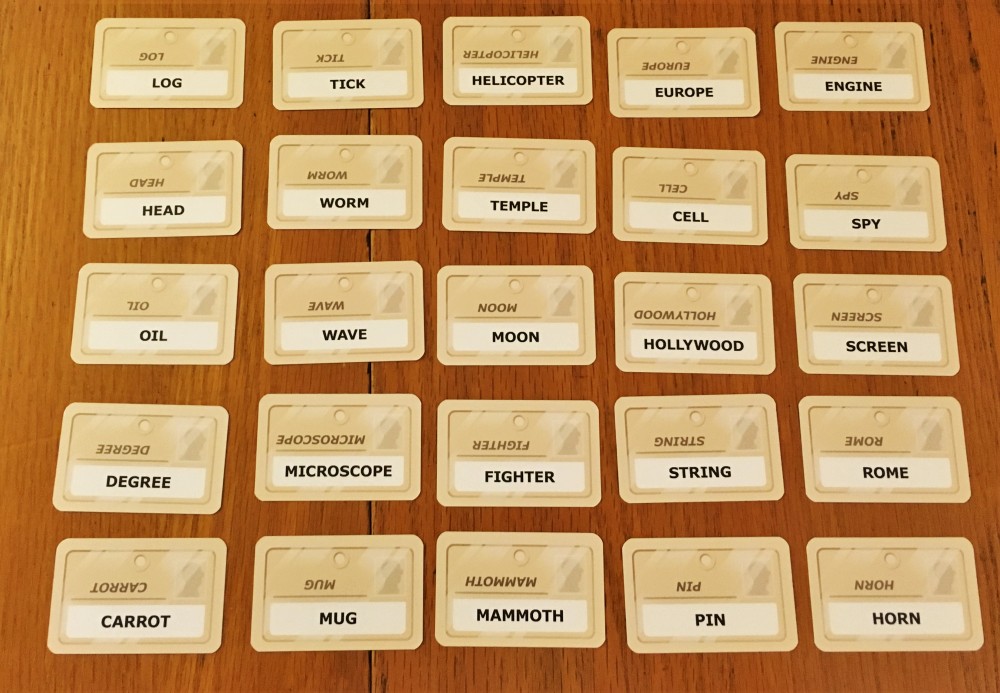 Spymaster’s select a map card that indicates what type of agent each card represents – red agents, blue agents, innocent bystanders, and the assassin. Each team’s Spymaster takes turns providing their team with one-word clues and then the number of cards that the clue relates to.

Here’s an example – let’s say that the red team has three agents with the codename “rabbit,” “pony,” and “monkey.” The red team’s Spymaster could give a one-word clue of “animal – 3.” The clue “animal” is the clue for which cards the Spymaster wants the team to pick, and “3” is how many cards that are related to that clue. 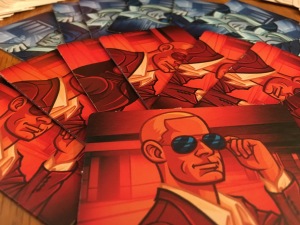 The team collectively touches the cards that they believe are the correct answers, and the Spymaster places a red, blue, innocent bystander, or assassin identity card on top of the card. That card can no longer be guessed as the agent’s identity has been discovered.

Whenever you think of party games you usually think of games like Card Against Humanity or Apples to Apples, which are really fun the first couple times you play them. The main reason games like that got old for me was because you’re confined to what’s printed on the cards. This doesn’t really give players an opportunity to think outside of the box since all the fun is already provided from the card rather than the players coming up with things on their own.

This leads to one of the reasons why I really like Codenames as a party game. It gives the Spymaster the ability to craft their clues based on the cards on the table. So, even though there’s a set amount of cards in the box, the endless combinations result in a huge variety of clues. It’s also really fun to have to deduce what the Spymaster is trying to get you to choose based on the given clue. Similar to the games above, there’s a pretty big advantage in knowing how the Spymaster thinks when they’re coming up with the clues. Like Mandee said in her portion of the review, Codenames has always been a great time and every group we’ve played with has had a blast.

The More The Merrier
One of the reasons we’ve really enjoyed this game is because it basically scales to any number of players that you want it to. We’ve had games where there’s been up to twelve people playing at once and as little as four people in some games. With a larger amount of players, it leads to a bit more collaboration on what the clues might be relating to. This creates a cool collaborative environment since one person might see something you didn’t even think about that relates really well with the clue. With that said, I don’t think I’d want to play more than twelve people at most since it makes it a little less engaging with so many people giving their input on what the clues mean. 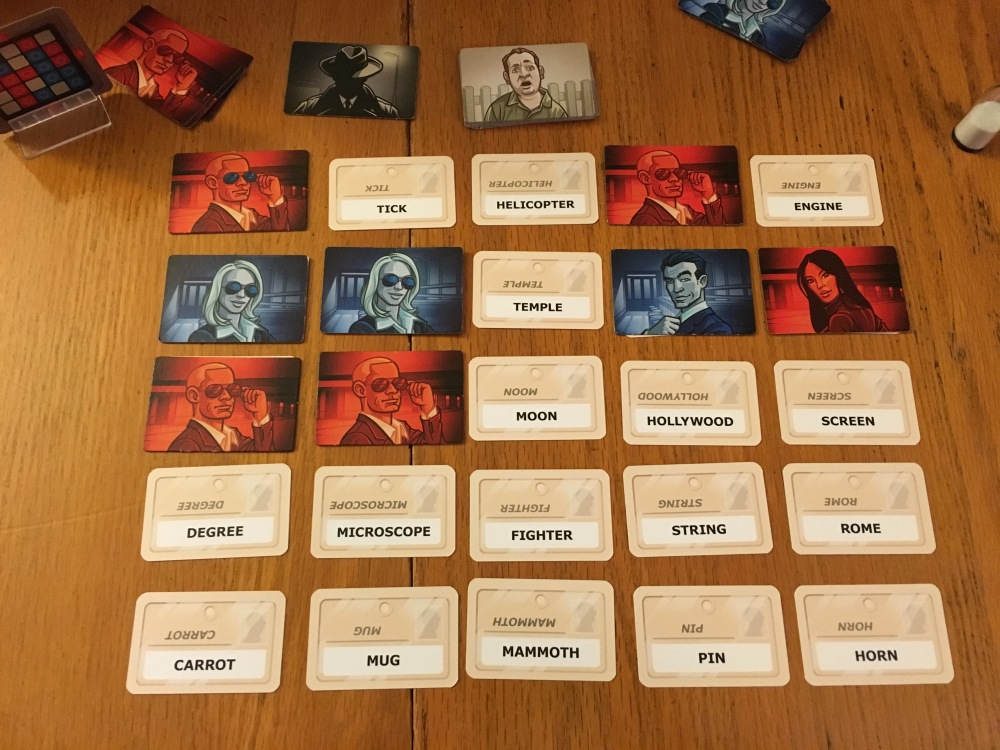 One Clue to Rule Them All
Playing as the Spymaster is quite the experience as you try your hardest to relate as many of the cards to one another. There’s no greater feeling than giving an awesome clue and having your team guess every single one. On the other hand, it can get frustrating when you hearing your team go down an entirely wrong train of thought on a clue that seemed so clear when you gave it.

Needless to say, the experience of Spymaster is both really rewarding and frustrating. I still remember my greatest moment as a Spymaster in this game was when I gave the clue “Action – 4” and by some miracle my team selected all the right cards resulting in us winning the game (I don’t remember the exact four cards, but I do know it took me forever to come up with this clue).

I think the hardest thing for a Spymaster to do is to remain completely stone faced as your team discusses what your clue might mean. It’s even harder when you aren’t allowed to tell your teammates if the card(s) they chose were actually the cards you intended them to pick. Since it is so hard to not give anything away, it does lead to some situations where the person playing the Spymaster does end up breaking the no reaction rule as they breath a sigh of relief when the correct card is taken.

It’s really hard not to have a reaction sometimes, and I’m not sure if there’s really a good way to prevent someone from doing it, short of leaving the room after giving a clue. It’s never been a huge issue with the groups we’ve played with, but if you have someone who is super competitive in your group, it could be a bigger issue. 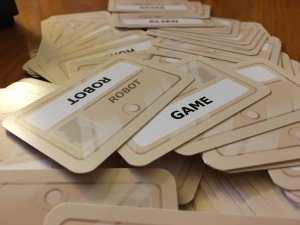 On the other side of the table, playing as the field operatives isn’t quite as exhilarating as being the Spymaster. There can be some instances where the Spymaster is trying way too hard to come up with the best clue in the world. This sounds like an awesome idea and all, but if you have to take more than five minutes to come up with a clue, it can get a little boring. This usually happens in the first round or two since there are so many possibilities and cards you want to try to avoid. So it’s a short-lived issue usually, but those first couple rounds can feel like an eternity if your Spymaster takes way too long to come up with something.

Final Thoughts
Overall, I really enjoyed this game and would recommend it to anyone that is looking for a good game to bring out at an event. It plays pretty quickly with any number of players and creates a lot of fun memories for both the field operatives and the Spymaster. We’ve even had a couple friends like it so much they went and bought it a couple days after playing it.

Like Mandee, the only negatives I had weren’t really with the design of the game, and those situations that I did bring up as negatives, are far outweighed by the great experience that this game provides.

Throughout high school and college, I played quite a few party games like Apples to Apples and Catchphrase. And while those games are great, they got old super fast and I can’t play them anymore. When Calvin and I play games with certain people, Codenames is always a staple, especially when we go somewhere where there are a lot of people.

Wherever we bring this game, it is incredibly well received. Most people who play this game love it, and will usually play it multiple times in a row because everyone wants a turn at being Spymaster.

Mind Reader
I really enjoy this game, and enjoy the challenges it brings being a Spymaster and being a field operative. It’s equally challenging to try to make someone read your mind as it is to read someone’s mind.

Being the Spymaster is sometimes super easy and sometimes super difficult. It’s all dependent on the cards you end up with as your agents. If you get a bad draw, it can make it difficult to give clues that encompass more than one card on the board. Other times, you can bust out three card clues with no problem. Some cards are just impossible to tie together with each other. 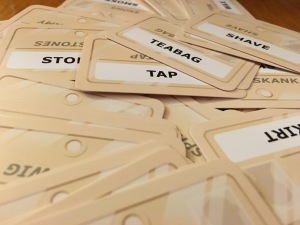 In addition to this, it’s really hard to plan ahead as a Spymaster. The first few rounds you go, it will probably take at least 5-10 minutes of both Spymaster’s thinking about their clues to give. This can make the game take longer. Honestly, I’ve never had a game last 15 minutes, despite what the game claims as the game time.

Listen, but Don’t Speak
By far, the most frustrating part of this game is being the Spymaster and having to listen to your team make arguments for why EVERY. SINGLE. CARD is related to your clue EXCEPT the one you want them to guess. This happened once when I gave the clue “country” and then people began debating whether or not I knew that Europe is a continent (Spoiler alert: I do).

There’s double the frustration/anxiety if this debate includes the assassin card. I can remember one game where I thought I gave a genius clue, only to realize that the assassin card could easily be included in that and then it was picked and we lost immediately.

As the Spymaster, you aren’t allowed to give any hints about what cards you want people to pick. That means facial expressions, verbal cues, or even body language. You have to sit there stoic and unemotional. And even after people guess correctly, you still can’t tell them that they guessed what you wanted them to.

I am fairly good at not showing any facial cues, as I’ve been a Spymaster a number of times now. There have been a few times where I’ve broken and just started laughing, like when I gave the clue “shopping” and someone said, “Clothes are made of cotton, it’s probably that.” And another friend gave her a look that exactly matched the face of the innocent bystander card. However, this aspect of the game is difficult for some people, and can cause people to inadvertently cheat. But I am one of those annoying people that calls people out on it.

Final Thoughts
Overall, any of my negative thoughts about this game really have nothing to do with the design and actual game play of Codenames. Because of that, I have to say I enjoy playing this game quite a bit, and have found that it plays great with very high player counts. We’ve played with 12 or so players once and it still works just as well as playing with fewer players (just more debate amongst players). For me, much of my rating is based on the experience a game provides me. And Codenames delivers exactly what I want it to: a great party game that everyone can enjoy.

She gives this game 9 Double Agents out of 10.

He gives this game 9.5 Baffled Civilians out of 10.